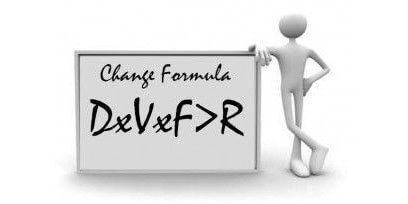 Dick Beckhard and Reuben Harris described the change formula in an article and attribute its creation to David Gleicher. Robert A. Gallagher 2005.

Change occurs when Dissatisfaction X Vision X First Steps that is greater than the Resistance.

If you are seeking some significant, system-wide change there are several core elements that need attention.

We need a critical mass of the organisation to:

Be dissatisfied (D) with the way things are (in relationship to the proposed change). This often doesn’t come until some force from outside the organisation creates a crisis.

Your vision (V), an image or an idea of what improvement would look like, that is grounded in the hopes and dreams of employees or members.

An old saying among leaders is…”Being right is only one-quarter of the battle.” It’s not uncommon for leaders to have a vision of what improvements are needed. The problem is that just communicating the vision (or mission, or strategic plan) will not bring about change.

Have a clear sense of what needs to be done as first steps (F). This means having a picture of what we can do differently in the short term that will move us toward that vision. Four major factors for leaders to consider are:
1. What competencies need to be developed or strengthened for people to be able to function in the changed situation? People don’t like to feel incompetent and change often creates that feeling
2. People are often hesitant to accept and implement the change because they fear losing friends and colleagues who are in opposition
3. Having the needed resources to make the change
4. Beginning to create an alignment of structures, process and practices that will be in harmony with the new way

Resistance (R) is likely to be present in all change efforts. The combined weight of the dissatisfaction, vision and first steps must to be able to overcome that resistance.

It is useful to use Chris Argyris’ intervention theory in applying the change formula. He maintains that the more people you get involved in diagnosing the situation, exploring options, and shaping a picture for the future, the more likely you are to develop a commitment in people that is sustainable under pressure and over time.

I share this, as it resonates with me, and these are elements I would be challenging in assessing the likelihood of success.